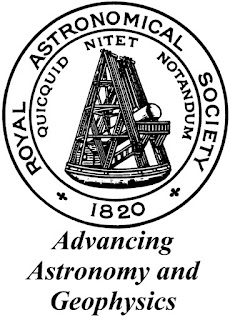 A list of the previous prize winners can be found here.

Posted by Leigh Fletcher at 22:14 No comments:

Email ThisBlogThis!Share to TwitterShare to FacebookShare to Pinterest
Labels: PhD

Hot Cyclones Churn at Both Ends of Saturn

Cassini thermal infrared observations in 2007 have revealed a surprise at Saturn’s north pole:  the first thermal observations of Saturn’s bizarre hexagonal wave (proving that the mechanism creating the hexagon perturbs the atmospheric temperature structure as well as the cloud patterns), and the detection of a small, localised tropospheric hotspot, sat right at Saturn’s north pole, despite 15 years of winter darkness.  We report our findings in today’s issue of Science, where we describe the symmetry in the dynamics governing Saturn’s winter and summer poles, and extrapolate these ideas to the other gas giants in our solar system.

The image shown above shows Saturn’s temperatures just below the tropopause (the temperature minimum), with the hexagon and the hotspot clearly defined by enhanced emission.  Surrounding the hotspot, you see Saturn’s typical belt/zone structure of alternating hot belts and cold zones, creating a ‘bulls-eye’ effect in this image.

The results were widely featured in the media, and some of the coverage is collected below.  I’ve also reprinted the original NASA/JPL press release which accompanied the story.

Hot Cyclones Churn at Both Ends of Saturn
http://www.nasa.gov/mission_pages/cassini/media/cassini-20080103.html


While scientists already knew about the hot spot at Saturn's south pole from previous observations by the W. M. Keck Observatory in Hawaii, the north pole vortex was a surprise. The researchers report their findings in the Jan. 4 issue of Science.

"We had speculated that the south pole hot spot was connected to the southern, sunlit conditions," said Glenn Orton, a senior research scientist at NASA's Jet Propulsion Laboratory, Pasadena, Calif., and co-investigator on Cassini's composite infrared spectrometer. "Since the north pole has been deprived of sunlight since the arrival of winter in 1995, we didn't expect to find a similar feature there."

The infrared data show that the shadowed north pole vortex shares much the same structure and temperature as the one at the sunny south pole. The cores of both show a depletion of phosphine gas, an imbalance probably caused by air moving downward into the lowest part of Saturn's atmosphere, the troposphere. Both polar vortices appear to be long-lasting and intrinsic parts of Saturn and are not related to the amount of sunlight received by one pole or the other.

"The hot spots are the result of air moving polewards, being compressed and heated up as it descends over the poles into the depths of Saturn," said Leigh Fletcher, a planetary scientist from the University of Oxford, England, and the lead author of the Science paper. "The driving forces behind the motion, and indeed the global motion of Saturn's atmosphere, still need to be understood."

Though similar, the two polar regions differ in one striking way. At the north pole, the newly discovered vortex is framed by the distinctive, long-lived and still unexplained polar hexagon. This mysterious feature encompassing the entire north pole was first spotted in the 1980s by NASA's Voyager 1 and 2 spacecraft. Cassini's infrared cameras also detected the hexagon in deep atmospheric clouds early in 2007.

In their paper, Fletcher and his colleagues report that the bright, warm hexagon is much higher than previous studies had shown. "It extends right to the top of the troposphere," says Fletcher. "It is associated with downward motion in the troposphere, though the cause of the hexagonal structure requires further study."

Winter lasts about 15 years on Saturn. Researchers anticipate that when the seasons change in the coming years and Saturn's north pole is once again in sunlight, they will be able to see a swirling vortex with high eye walls and dark central clouds like the one now visible at the south pole. "But Saturn may surprise us again," says Fletcher.

"The fact that Neptune shows a similar south polar hot spot whets our appetite for the strange dynamics of the poles of the other gas giants," Fletcher says.

More information about Jupiter's poles will come from NASA's Juno mission, currently scheduled for launch in 2011 and arrival in 2016.

Fletcher's research was funded by the United Kingdom's Science and Technology Facilities Council.

The Cassini-Huygens mission is a cooperative project of NASA, the European Space Agency and the Italian Space Agency. JPL, a division of the California Institute of Technology in Pasadena, manages the Cassini-Huygens mission for NASA's Science Mission Directorate, Washington. The Cassini orbiter was designed, developed and assembled at JPL. The science team for Cassini's composite infrared spectrometer team is based at NASA's Goddard Space Flight Center, Greenbelt, Md.

Posted by Leigh Fletcher at 22:10 No comments: