Eighteen months after the mysterious collision on the nightside of Jupiter, our studies of the infrared signatures of the debris scar have finally been published by Icarus and Astronomy & Astrophysics.  The particulates in the debris, combined with the response of Jupiter’s atmosphere to the high energy collision, have revealed the 2009 impactor to be a completely different beast to Shoemaker-Levy 9 in 1994.  Specifically, the chain of chemical reactions triggered by the 2009 impact produced products that are highly suggestive of a rocky, water-depleted asteroid, rather than a water-rich icy comet. 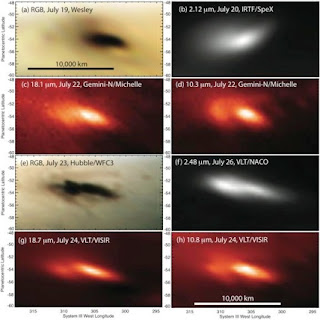 The four papers being highlighted in these press releases are:

The JPL press release is included below.  Further coverage of this research can be found at: 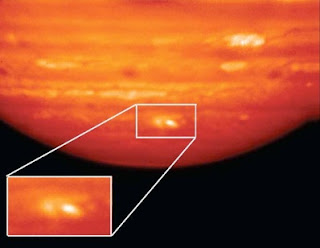 A hurtling asteroid about the size of the Titanic caused the scar that appeared in Jupiter's atmosphere on July 19, 2009, according to two papers published recently in the journal Icarus.

Data from three infrared telescopes enabled scientists to observe the warm atmospheric temperatures and unique chemical conditions associated with the impact debris. By piecing together signatures of the gases and dark debris produced by the impact shockwaves, an international team of scientists was able to deduce that the object was more likely a rocky asteroid than an icy comet. Among the teams were those led by Glenn Orton, an astronomer at NASA's Jet Propulsion Laboratory, Pasadena, Calif., and Leigh Fletcher, researcher at Oxford University, U.K., who started the work while he was a postdoctoral fellow at JPL.

"Both the fact that the impact itself happened at all and the implication that it may well have been an asteroid rather than a comet shows us that the outer solar system is a complex, violent and dynamic place, and that many surprises may be out there waiting for us," said Orton. "There is still a lot to sort out in the outer solar system."

The new conclusion is also consistent with evidence from results from NASA's Hubble Space Telescope indicating the impact debris in 2009 was heavier or denser than debris from comet Shoemaker-Levy 9, the last known object to hurl itself into Jupiter's atmosphere in 1994.

Before this collision, scientists had thought that the only objects that hit Jupiter were icy comets whose unstable orbits took them close enough to Jupiter to be sucked in by the giant planet's gravitational attraction. Those comets are known as Jupiter-family comets. Scientists thought Jupiter had already cleared most other objects, such as asteroids, from its sphere of influence. Besides Shoemaker-Levy, scientists know of only two other impacts in the summer of 2010, which lit up Jupiter's atmosphere.

The July 19, 2009 object likely hit Jupiter between 9 a.m. and 11 a.m. UTC. Amateur astronomer Anthony Wesley from Australia was the first to notice the scar on Jupiter, which appeared as a dark spot in visible wavelengths. The scar appeared at mid-southern latitudes. Wesley tipped off Orton and colleagues, who immediately used existing observing time at NASA's Infrared Telescope Facility in Mauna Kea, Hawaii, the following night and proposed observing time on a host of other ground-based observatories, including the Gemini North Observatory in Hawaii, the Gemini South Telescope in Chile, and the European Southern Observatory's Very Large Telescope in Chile. Data were acquired at regular intervals during the week following the 2009 collision.

The data showed that the impact had warmed Jupiter's lower stratosphere by as much as 3 to 4 Kelvin at about 42 kilometers above its cloudtops. Although 3 to 4 Kelvin does not sound like a lot, it is a significant deposition of energy because it is spread over such an enormous area.

Plunging through Jupiter's atmosphere, the object created a channel of super-heated atmospheric gases and debris. An explosion deep below the clouds – probably releasing at least around 200 trillion trillion ergs of energy, or more than 5 gigatons of TNT -- then launched debris material back along the channel, above the cloud tops, to splash back down into the atmosphere, creating the aerosol particulates and warm temperatures observed in the infrared. The blowback dredged up ammonia gas and other gases from a lower part of the atmosphere known as the troposphere into a higher part of the atmosphere known as the stratosphere.

"Comparisons between the 2009 images and the Shoemaker-Levy 9 results are beginning to show intriguing differences between the kinds of objects that hit Jupiter," Fletcher said. "The dark debris, the heated atmosphere and upwelling of ammonia were similar for this impact and Shoemaker-Levy, but the debris plume in this case didn't reach such high altitudes, didn't heat the high stratosphere, and contained signatures for hydrocarbons, silicates and silicas that weren't seen before. The presence of hydrocarbons, and the absence of carbon monoxide, provide strong evidence for a water-depleted impactor in 2009."

The detection of silica in this mixture of Jovian atmospheric gases, processed bits from the impactor and byproducts of high-energy chemical reactions was significant because abundant silica could only be produced in the impact itself, by a strong rocky body capable of penetrating very deeply into the Jovian atmosphere before exploding, but not by a much weaker comet nucleus. Assuming that the impactor had a rock-like density of around 2.5 grams per cubic centimeter (160 pounds per cubic foot), scientists calculated a likely diameter of 200 to 500 meters (700 to 1,600 feet).

Scientists computed the set of possible orbits that would bring an object into Jupiter in the right range of times and at the right locations. Then they searched the catalog of known asteroids and comets to find the kinds of objects in these orbits. An object named 2005 TS100 – which is probably an asteroid but could be an extinct comet – was one of the closest matches. Although this object was not the actual impactor, it has a very chaotic orbit and made several very close approaches to Jupiter in computer models, demonstrating that an asteroid could have hurtled into Jupiter.

"We weren't expecting to find that an asteroid was the likely culprit in this impact, but we've now learned Jupiter is getting hit by a diversity of objects," said Paul Chodas, a scientist at NASA's Near-Earth Object Program Office at JPL. " Asteroid impacts on Jupiter were thought to be quite rare compared to impacts from the so-called 'Jupiter-family comets,' but now it seems there may be a significant population of asteroids in this category."

Scientists are still working to figure out what that frequency at Jupiter is, but asteroids of this size hit Earth about once every 100,000 years. The next steps in this investigation will be to use detailed simulations of the impact to refine the size and properties of the impactor, and to continue to use imaging at infrared, as well as visible wavelengths, to search for debris from future impacts of this size or smaller.

JPL is managed for NASA by the California Institute of Technology in Pasadena.

Posted by Leigh Fletcher at 21:49 No comments: