Saturn experiences seasons for the same reason that the Earth does - it's axis is tilted relative to it's orbit, so the angle of the Sun above the horizon varies over the course of the year.  With one crucial difference:  Saturn's orbit takes 30 Earth-years, so the seasons are incredibly long.  Cassini has now been observing Saturn for long enough to see the first signs of atmospheric changes related to the changing season.  To the best of my knowledge, this is the first time that we've been able to watch the seasons change on a gas giant from a visiting spacecraft.

The new Cassini thermal infrared results, which track the changing temperatures over the course of the mission, were recently published in the journal Icarus: 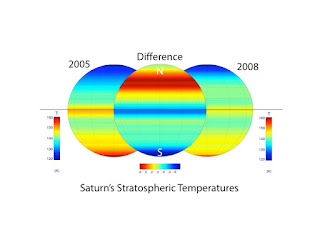 When Cassini first arrived in 2004, Saturn was in the middle of the balmy southern summer, with it's south pole oriented towards the Sun and the north pole shrouded in winter darkness.  Five years later, Cassini observed the ring-plane crossing, when Saturn's rings appear edge on from our viewpoint and both hemispheres are subject to the same amount of heating from the sun, so that we're now in southern autumn and northern spring.  The Cassini instruments, including the Composite Infrared Spectrometer (CIRS), have noted dramatic changes to the atmospheric temperature, composition and aerosol content as time has progressed.  As the spring hemisphere emerged from the shadow of the rings, CIRS measured 6-8 K substantial warming in the northern stratosphere, combined with a gradual cooling of the southern stratosphere.  Saturn's south polar hotspot is still there, but has cooled in the five years since it was first observed.  And Saturn's equator is showing evidence for complicated changes to the temperatures and winds, as Saturn's semi-annual oscillations (Orton et al., 2008, Nature) modulate the atmosphere.  Finally, the CIRS data show the effects of  growing hazes and aerosols in the springtime conditions, consistent with visible images showing the replacement of Saturn's northern blue hues of 2004 by the more familiar yellow-ochre colours as spring progresses.

Using a knowledge of how Saturn's atmospheric gases absorb solar energy (heating the atmosphere up) and emit thermal heat energy (cooling the atmosphere down), we were able to reproduce the observed seasonal changes with a climate model.  That climate model was then used to make predictions for Saturn's changes through to 2017, the end of Cassini's solstice mission.  The spring hemisphere will continue to warm, possibly with the formation of a north polar hotspot like the one we saw in the south.  The south will cool as it approaches winter, and moves into the shadow of Saturn's rings.  By 2017 the asymmetry in temperature we saw at the beginning of the mission will be almost completely reversed, and Cassini will have observed Saturn for almost half of it's year.  Such models provide us with an intricate understanding of how the climates on the outer planets respond to changes in the amount of solar energy, and provides another excellent example of how Cassini is helping to shape out understanding of atmospheric processes throughout our solar system.

Saturn’s Seasons Are Made in the Shade

Saturn’s rings act like a broad-brimmed sunhat, shading large swaths of the planet’s face. Now, after six years of constant observation by the Cassini spacecraft, scientists have been able to observe the dramatic effects this cooling shadow creates in Saturn’s atmosphere.

This figure shows shifting stratospheric temperatures obtained by Cassini between 2005 to 2008. The difference between the temperatures is shown in the middle, with red indicating warming in the stratosphere and blue indicating cooling.

Saturn's atmosphere is affected by seasonal changes just like Earth's is, but perhaps even more so, because the poles spend nearly 15 Earth-years in winter darkness and the next 15 years in sunlight. On top of that, the cooling shadow of the rings causes differences in heating and sunlight-driven chemistry between the shaded and sunlit parts of Saturn's atmosphere.

Cassini's years in orbit around Saturn have produced the first long-term space-based measurements of seasonal change on a gas-giant planet. In particular, Cassini's composite infrared spectrometer has recorded seasonal changes in Saturn's atmosphere, witnessing rapid responses in the atmospheric temperatures and hazes as the equinox approached last August. At that time, the incoming sunlight hit the rings edge-on, reducing the ring shadow to just a thin line across the planet's middle. Mission scientists have been struck by how quickly the atmosphere changed in response to the shifting ring shadow.

Even though the ring-shaded portion of the atmosphere is cooler than the rest, the planet seems to quickly adjust the disequilibrium by filling the cool patches with warmer air. "Because the shadowed region of the atmosphere moves over time, it makes for interesting atmospheric dynamics in the regions newly emerging from ring shadow in the springtime," said researcher Leigh Fletcher of NASA's Jet Propulsion Laboratory and the University of Oxford. "Cassini found that Saturn's atmosphere changes drastically depending on what season you're in. When the shadow is gone, the atmosphere responds quickly by warming up."

As equinox approached last August, Saturn's northern spring hemisphere began to change rapidly, Fletcher said. The stratosphere in Saturn's northern mid-latitudes warmed faster than anywhere else on the planet as it emerged from the shadow of the rings. Between Cassini's arrival in 2004 and the spring equinox in 2009, that area warmed by 6 to 8 Kelvin (about 11 to 14 degrees Fahrenheit). At the same time, the blue shades seen in Saturn's northern hemisphere at the start of the mission were rapidly replaced by the more familiar yellow-ochre hues, demonstrating a close relation between season, temperatures and cloud colors. Saturn's warm south polar stratosphere was also seen to cool over the course of the mission, and Cassini scientists expect the development of an analogous warm north polar stratosphere as spring progresses.

Observing how the stew of gases in Saturn's atmosphere circulate, heat, and cool contributes to our basic understanding of planetary atmospheres, including Earth's, Fletcher said. "This sort of study places Earth's own seasonal variations into the context of seasonal changes throughout our solar system."

"In some ways, Saturn is a simpler system than Earth -- no biogenic influences on the climate, no surfaces or continents to interrupt the flow of the atmosphere from one place to the next," he said. "But in other ways, Saturn's atmosphere is complicated, with dynamics, wave activity and chemistry that scientists are still studying and trying to understand." Fletcher points to the example of a recently discovered long-lived equatorial wave pattern at Saturn that ripples back and forth within Saturn's upper atmosphere. In this region, temperatures switch from one altitude to the next in a candy cane-like, striped, hot-cold pattern. These varying temperatures force the wind in the region to keep changing direction from east to west, jumping back and forth. As a result, the entire region oscillates like a wave. (See http://saturn.jpl.nasa.gov/news/cassinifeatures/feature20080507/.)

Cassini's mission was recently extended through 2017. This will be a particularly exciting time if the northern hemisphere continues to respond to the changing season as fast as it has in the past couple of years, said Fletcher. "We could start to see the development of a warm north polar stratosphere, mirroring the one observed in the south. We'll almost certainly see a 'flip' in Saturn's temperature field, and by the end of Cassini's lifetime, the northern hemisphere will be warmer than the south, almost the complete reverse of conditions at the start of the mission."

By the end of its mission, Cassini will have a record of Saturn's seasons for at least portions of spring, summer, autumn and winter, making Saturn the best-studied gas giant planet. "Cassini is the first planetary spacecraft in history to provide that opportunity," said Fletcher. "To really understand a planet's weather and environment, you have to watch how things change and evolve with time."

This Cassini Science League entry is an overview of a science paper authored, or co-authored, by at least one Cassini scientist. The information above was derived from or informed by the following publications:

Posted by Leigh Fletcher at 21:13 No comments: