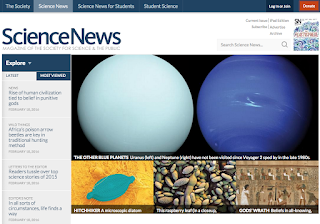 An article on new missions to the Ice Giants appears in the February 20, 2016, issue of Science News with the headline, "Secrets of the ice giants: Time to shine some light on Uranus and Neptune, our two most far-out planets."  I had a great conversation with their reporter, Chris Crockett, on the European perspective on this future mission, particularly now that a NASA Science Definition Team has been formed to consider the science case for such an ambitious project.  Take a look at the great write-up here:

https://www.sciencenews.org/article/support-grows-return-ice-giants-uranus-and-neptune
Posted by Leigh Fletcher at 08:47 No comments: