From an Oxford new release:  AOPP researchers feature strongly as contributors to the first edition of the new series (season two!) of the BBC's Sky at Night programme on BBC4 presented by Dr. Maggie Aderin-Pocock and Oxford Astrophysics's Chris Lintott. 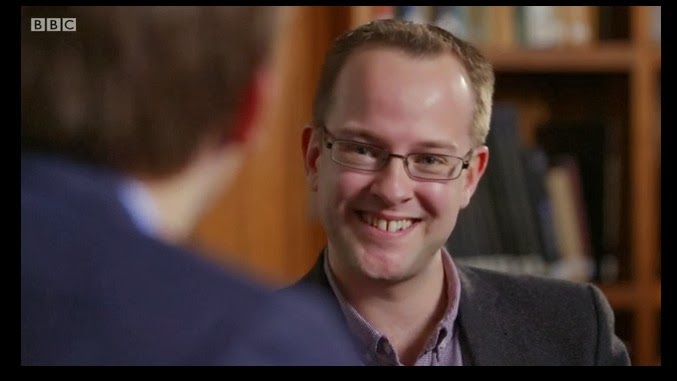 Prof. Peter Read demonstrated a laboratory experiment with guest presenter Helen Czerski that may help to explain the origin of Jupiter's Great Red Spot and other giant, long-lived storms that dominate the weather on Jupiter. In contrast to the Earth, where large-scale temperature contrasts are primarily between the equator and poles, on Jupiter the contrasts are strongest between the bright and dark bands.  The temperature changes considerably from the warm dark belts to the colder, brighter zones.  Peter's experiments show that the main instability of such a flow leads to the formation of compact, recirculating vortices - which look very similar to those seen on Jupiter.

The formation of Jupiter's zonal bands may also result from the effects of its very rapid rotation (once every ten hours) and the curvature of the planet. This was graphically illustrated in Helen Czerski's presentation of some numerical model simulations by AOPP graduate student Yixiong Wang, which show that an Earth-like planetary atmosphere would spontaneously break up into multiple zonal bands if, like Jupiter, the planet were much bigger than Earth and/or it rotated much more rapidly.

The show also ventured out into the Jupiter system to explore some of the processes at work on its diverse collection of moons.  Dr. Leigh Fletcher explained the significance of recent discoveries about the moon Europa, in conversation with Chris Lintott.  Europa has long been regarded as a potentially-habitable environment (i.e., it may have all the ingredients necessary to support life), and as a tantalising destination for future exploration.  Chaotic terrain at Europa's low latitudes has the appearance of ice bergs locked into a frozen sea, allowing us to understand the properties of the global, sub-surface ocean by reading the geology and chemistry on Europa's icy surface.

However, new findings from the Hubble Space Telescope suggest another way of probing this deep, hidden ocean - geysers of water appear to be venting 200 km high over Europa's south pole, similar to those found previously on Saturn's icy moon Enceladus.  Leigh described the implications of this discovery for the exploration of the jovian system by ESA's Jupiter Icy Moons Explorer (JUICE), expected to launch in the 2020s.  In particular, Oxford is a co-investigator on the US-led ultraviolet spectrograph (UVS) which will be conducting sensitive searches for this type of spectacular geologic  activity on Jupiter's moons.

The programme is available for another week on BBC i-Player (see http://www.bbc.co.uk/programmes/b03vg99x)

Further details of the Europa plume discovery and JUICE mission can be found here:
http://planetaryweather.blogspot.co.uk/2013/12/the-plumes-of-europa.html

…and a discussion of what gives Jupiter its colourful stripes:
http://planetaryweather.blogspot.co.uk/2014/01/what-gives-jupiter-its-colourful-stripes.html

Posted by Leigh Fletcher at 11:02 No comments: