The Problem with Earth 2.0

Like many others, I'm starting to develop a severe twitch whenever I see the words 'Earth-like' or 'Earth twin' or 'Earth-2.0'.  The twitch was pretty maddening last Friday, when the the discovery of Kepler-452b was announced by NASA and shared globally by media outlets, including the BBC report here.  The paper, by Jenkins et al. (arxiv), describes the detection of a "possibly rocky" world 1.63±0.2 times the radius of Earth, orbiting a Sun-like star on a 385-day orbit.  In fact, the probability of this world being rocky lies somewhere between 49% and 62%, according to models and their statistical analyses.  So it's a 50:50 chance of being a rocky world.  The star is slightly older and larger than our own Sun, and at 1400 light years from Earth it's going to be an immense challenge to learn more about the conditions on this world.

Taking a step back for a moment, the very fact that our species has been able to build machines that today, in the early 21st century, are capable of discovering worlds that *could* be similar to our own is pretty breathtaking - an incredible feat of human achievement that we hope has been matched and exceeded by other civilisations out there in our universe!  Exoplanetary science has advanced at an incredible rate, with understandable excitement surrounding new discoveries and what these new worlds might be like.  The problem is that our excitement is sometimes overreaching what we truly know about these distant worlds.  Sadly, the answer to that is "next to nothing."

The paper by Jenkins and the Kepler team is very clear about this.  They write about probabilities and present the facts, as scientists should be doing.  There are subtleties and complexities in the reduction and interpretation of these data that could take years to fully understand, and science is honest about all this. The problem is that the media, by and large, are after a catchy headline to make us buy their papers or click on their ads. And public outreach departments for universities, businesses and space agencies all know this.  This chain means those subtleties are lost, and we're left with headlines about the discovery of an Earth twin.  And it's that which drives so many of us nuts.

The problem is that the community starts to look like the 'boy who cried wolf.'  Yes, we're now another step closer to the goal of finding an Earth (in this case, we know so little about this world that it could be rocky, but it could also be gassy and very unlike our home).  And yes, this could be the closest we know of to date.  But with every step, these big media releases diminish the next discovery.  Media outlets will work harder and harder to push their headlines, using more and more hyperbole to describe the new results.  Eventually, will people care when a true Earth twin is discovered by some future telescope?  As scientists on Twitter have pointed out, this regular news headline is becoming as familiar as the story of water on Mars ("yawn, we've discovered evidence of Martian water.... again...").  And one day, will we be saying "scientists have discovered more biomarkers in exoplanet BLAH756b's atmosphere... yawn...", because of this need to publicise work to win public admiration and sorely-needed grant money?

I'm being mean, as I've publicised things that didn't need publicising, so I can understand the temptation.  And there's the flipside - some budding young wannabe scientist might see this news and think "that's what I want to do with my life."  And that'd be a great thing.  I hope it prompts them to look deeper, follow through the hyped-up press releases and actually read the scientists' words directly.  It's what we don't know that's keeping the community so excited about these new discoveries!  What about its atmosphere? Magnetic field?  Plate tectonics?  Oceans and mountains and vegetation and life?  What if it's a small version of Neptune?  That's what get's me fired up.

PS.  Read Phil Plait's take on all this here.

Posted by Leigh Fletcher at 11:48 No comments:

Email ThisBlogThis!Share to TwitterShare to FacebookShare to Pinterest
Labels: Exoplanets

Seven months after the announcement that the JUICE mission had been formally adopted by ESA (November 2014), and the Invitation to Tender (ITT) released to the prospective contractors in December, we learned last week that Airbus Defence and Space (@AirbusDS) has been chosen by ESA's Industrial Policy Committee to build our ride to the jovian system.  The selection of an industrial contractor is making the whole process feel so much more real, and Airbus is expected to sign the contract in September.  That means that work could start as early as the end of the month. 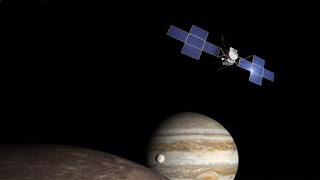 Airbus DS is "the world's second largest space company," with sites around Europe in Toulouse (France), Friedrichshafen (Germany), Stevenage (UK) and Madrid (Spain).  They're very well known in planetary exploration, having built Venus and Mars Express, Huygens for Titan and the Rosetta spacecraft.  Today they're building ExoMars, BepiColombo and Solar Orbiter, so with that heritage they seem like a great choice to me.  Building the 5-tonne JUICE spacecraft will be a challenge, with its 97 square metres of solar panels to provide the juice for JUICE out at 5AU, and the requirements for an unprecedented level of magnetic cleanliness to prevent any problems with the sophisticated payload suite.

Airbus DS won the €350M contract ($389M) after a competition with a team composed of Thales Alenia Space of France and Italy and OHB SE of Germany.  From ESA:  "The contract covers the industrial activities for the design, development, integration, test, launch campaign, and in-space commissioning of the spacecraft. The Ariane 5 launch is not included and will be procured later from Arianespace."

From spacenews:  "ESA’s geographic return rules mean work-share distribution must closely match each nation’s financial input, meaning Germany, France, Britain and Italy, as ESA’s biggest members, must be guarantee major pro rata roles for their domestic industry."  That means the the individual ESA member states must get out what they put in, so everyone will hopefully get a slice of the JUICE pie...

Posted by Leigh Fletcher at 11:17 No comments:

Every now and then I spend hours of my time wrestling with Latex documents to get them to do my bidding.  I'll try to keep a record of any useful hints and tips here.

To highlight paragraphs of text, including references:


Posted by Leigh Fletcher at 15:00 No comments: