No Debris from the 2010 Jupiter Impact 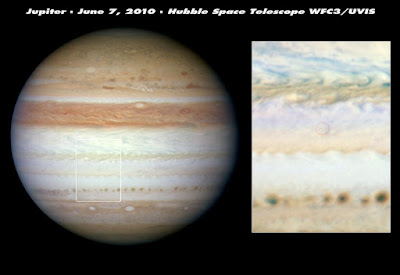 New and detailed observations from the NASA/ESA Hubble Space Telescope have provided insights into two recent events on Jupiter: the mysterious flash of light seen on 3 June and the recent disappearance of the planet’s dark Southern Equatorial Belt.

At 22:31 (CEST) on 3 June 2010 Australian amateur astronomer Anthony Wesley saw a two-second-long flash of light on the disc of Jupiter. He was watching a live video feed from his telescope. In the Philippines, amateur astronomer Chris Go confirmed that he had simultaneously recorded the transitory event on video. Wesley was the discoverer of the now world-famous July 2009 impact.

Astronomers around the world suspected that something significant must have hit the giant planet to unleash a flash of energy bright enough to be seen here on Earth, about 770 million kilometres away. But they didn’t know how just how big it was or how deeply it had penetrated into the atmosphere. Over the past two weeks there have been ongoing searches for the “black-eye” pattern of a deep direct hit like those left by former impactors.

The sharp vision and ultraviolet sensitivity of the Wide Field Camera 3 aboard the NASA/ESA Hubble Space Telescope were used to seek out any trace evidence of the aftermath of the cosmic collision. Images taken on 7 June — just over three days after the flash was sighted — show no sign of debris above Jupiter’s cloud tops. This means that the object didn’t descend beneath the clouds and explode as a fireball. If it had done, then dark sooty blast debris would have been ejected and would have rained down onto the clouds.

Instead the flash is thought to have come from a giant meteor burning up high above Jupiter’s cloud tops, which did not plunge deep enough into the atmosphere to explode and leave behind any telltale cloud of debris, as seen in previous Jupiter collisions.

“The cloud tops and the impact site would have appeared dark in the ultraviolet and visible images due to debris from an explosion,” says team member Heidi Hammel of the Space Science Institute in Boulder, Colorado, USA. "We can see no feature that has those distinguishing characteristics in the known vicinity of the impact, suggesting there was no major explosion and no ‘fireball’.”

Dark smudges marred Jupiter’s atmosphere when a series of fragments of Comet Shoemaker-Levy 9 hit Jupiter in July 1994. A similar phenomenon occurred in July 2009 when a suspected asteroid slammed into Jupiter. The latest intruder is estimated to be only a fraction of the size of these previous impactors and is thought to have been a meteor.

“Observations of these impacts provide a window on the past — onto the processes that shaped our Solar System in its early history,” says team member Leigh Fletcher of the University of Oxford, UK. “Comparing the two collisions — from 2009 and 2010 — will hopefully yield insights into the types of impact processes in the outer Solar System, and the physical and chemical response of Jupiter's atmosphere to these amazing events.”

As a bonus, Hubble’s observations also allowed scientists to get a close-up look at changes in Jupiter’s atmosphere following the disappearance of the dark cloud feature known as the Southern Equatorial Belt several months ago.

The team predicts that these ammonia clouds should clear out in a few months, as they have done in the past. The clearing of the ammonia cloud layer should begin with a number of dark spots like those seen by Hubble along the boundary of the south tropical zone.

“The Hubble images tell us these spots are holes resulting from localised downdrafts. We often see these types of holes when a change is about to occur,” Simon-Miller says.

“The Southern Equatorial Belt last faded in the early 1970s. We haven’t been able to study this phenomenon at this level of detail before,” Simon-Miller adds. “The changes of the last few years are adding to an extraordinary database on dramatic cloud changes on Jupiter.”

Posted by Leigh Fletcher at 21:16 No comments: