This month I was contacted by a reporter from 'Space Boffins' to ask some questions about Triton, the captured Kuiper Belt Object orbiting Neptune.  Here are my replies.... 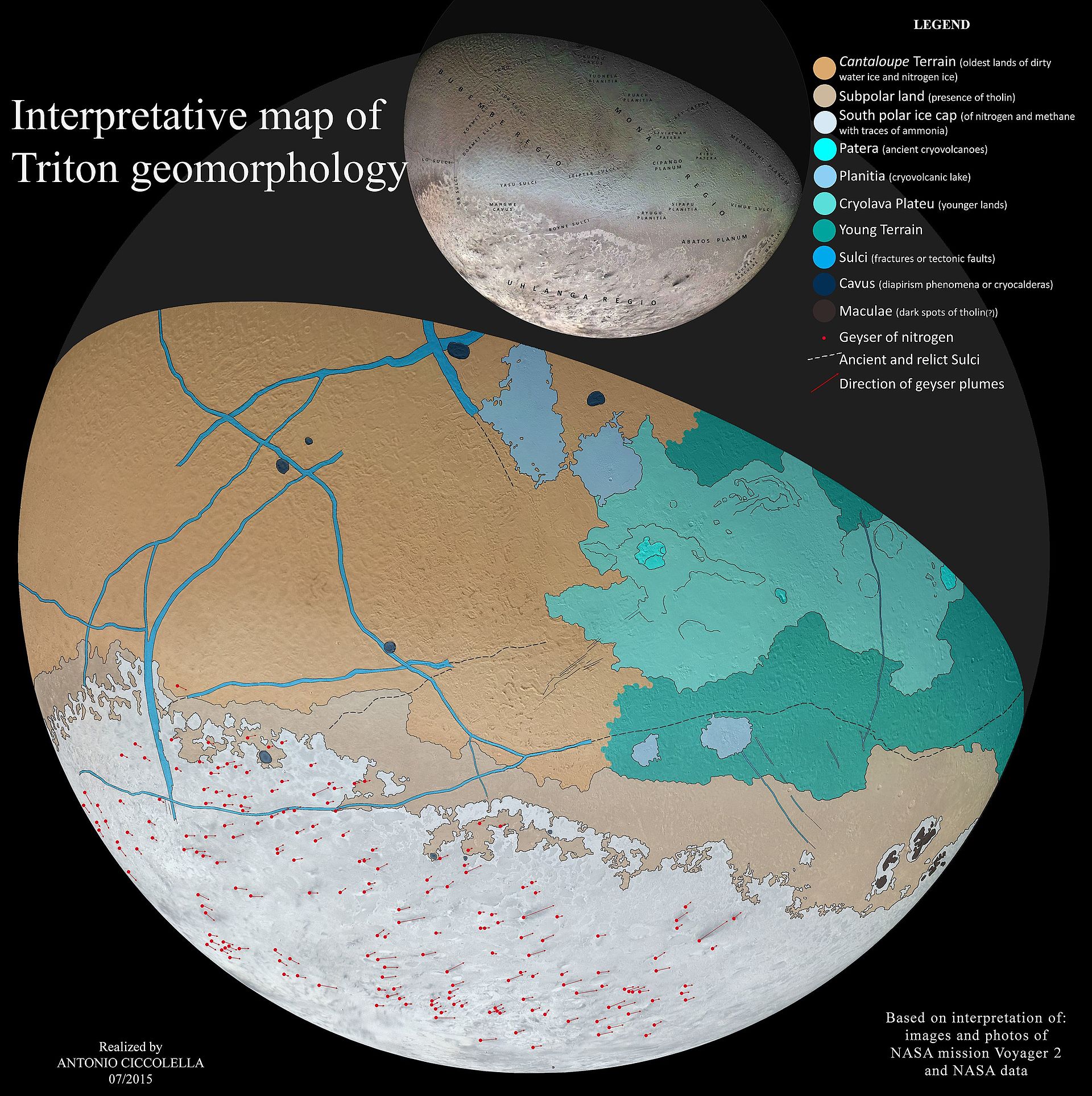 How much of a surprise was the data from Triton, when it was first seen by Voyager 2?
By the time it reached Neptune, the Voyager missions had already cemented themselves as the most important interplanetary missions of all time.  But Uranus had been somewhat of a disappointment - like Titan before it, the skies of Uranus appeared bland and without the dramatic atmospheric activity shown by Jupiter and Saturn.  In the summer of 1989, Neptune went from a mere point of light, an astronomical object, to being a fully-resolved world in its own right.  What’s more, the icy moons of Saturn and Uranus, though geologically interesting, were simply cratered balls of ice and rock.  Who would’ve believed Triton would be any different?  When those first images came down, the onlookers at JPL were surprised (remember, this is way before 24-hour rolling news or Twitter) - a distant moon of a distant world appeared geolocically active, with geysers erupting from the young, frozen ice and nitrogen surface of ridges, plains, depressions and fissures.  Far from a geologically-dead world, this was an active environment producing its own tenuous atmosphere, and is a good ambassador for the more distant (and harder to reach) objects from the Kuiper Belt.

To what extent is the moon an oddity?
It’s that sense that Triton is an interloper in the Neptune system, that it shouldn’t be there, but that it’s a representative of the unusual worlds even further from the Sun.  We’ve seen so tantalisingly little of it compared to the satellites of the giant planets, and after the Pluto flyby revealed the extreme and unexpected geological activity of that distant world, a return trip to Triton - our most accessible example of a captured KBO - has to be on the cards.

Surprising that it’s not inert but has geysers (activity at such a distance from the Sun)?
Triton’s surface certainly shows all the signs of icy volcanism, which will have shaped and resurfaced the moon over the millennia.  Where the internal energy comes from to power that activity is unclear - tidal stresses, like those that keep Europa’s internal oceans liquid and Io as the most volcanically active place in the solar system, seem to be insufficient.  It’s interesting that the N2 geysers all appeared to occur where the sunlight falling on Triton was the strongest, so the action of solar heating destabilising the surface layers must play a role in the geysers, which are distinct from the larger scale evidence of cryovolcanism.

How frustrating is it that you’ve got such little data on it?
Excruciating!  A whole world just waiting there for humankind to discover, map, and understand (the same is true of much of the Uranian and Neptunian systems).  But thank heavens that NASA had the ambition and tools to get us what little data we have - I hope that ESA and NASA, working together, will one day build on the legacy of the Voyagers.


What stage are missions in development to visit Neptune and its moons?
For the past decade or so, there have been very positive signs that the agencies on both sides of the Atlantic are taking the ice giants very seriously.  Back in 2009, our community wrote a series of ‘white papers’ proposing the myriad exciting reasons to mount a mission to the ice giants as a natural successor to the outrageously successful Cassini mission.  Subsequently, an ice giant flagship mission was recommended by the US decadal survey as their 3rd priority (after another Mars rover in 2020 and the Europa Clipper mission, currently in its implementation phase).  At the same time, European scientists began to throw around an idea for a Uranus mission called Uranus Pathfinder (led by UK scientists) - this was submitted to ESA’s call for medium class missions twice, and also as a ‘large class’ mission to follow JUICE (the Jupiter Icy Moons Explorer, also in the implementation phase).  None of these mission concepts proceeded to the crucial next step (a formal study by ESA), but they were deemed sufficiently exciting that the panels urged us to keep fighting the good fight.  The acknowledgement was that the time of the ice giants would come, eventually.

Then, last year, NASA and ESA worked jointly on a ‘Science Definition Team’ for a future ice giant mission, evaluating the pros and cons (both scientifically, financially, and technologically).  They looked at flyby spacecraft, orbiters, atmospheric probes, and even dual spacecraft, one for each of the ice giants.  An orbiter, along with a probe, is probably the most natural choice - think of a long-lived Cassini-like mission, complete with a 21st century instrument complement, executing multiple flybys of Triton to map it surface geology and chemistry, the tenuous atmosphere and geological activity, and maybe its subsurface using ice penetrating radar, magnetometers and gravity measurements.  The extensive report was presented to both NASA and ESA (and the community at large), with the recommendation being for further study and refinement.  But I hope that this will influence the next US decadal survey to put an ice giant mission right at the top of the list, with international partnership as a key enabling element (maybe a NASA orbiter with an ESA-provided probe)?

Could there be life there?
Everywhere we look in the outer solar system, we find surprises.  Geologically dead?  No.  Solid balls of ice?  No.  Inexplicable geological activity?  Yes.  One of the common themes emerging is that these icy worlds possess subsurface oceans - hidden, dark, abyssal seas that could host the right conditions to be labelled ‘habitable’.  That is, we need to ensure that the water, chemicals, and source of energy are present at the same location and for long aeons of time.  Europa Clipper and JUICE will answer that question in the jovian system.  But to address this for an ice giant satellite needs a dedicated mission.

Any chance of landing on Neptune or Triton?
Uranus and Neptune are both perfect targets for atmospheric entry probes, descending under parachute into the skies of the ice giant to sniff out the chemical species that are present.  With no atmosphere to slow it down, a landing on one of their moons (Triton included) would be a tremendous challenge, not least because you need to take enough fuel with you to slow yourself down.  But never say never, and if, after a first proper reconnaissance of an ice giant system we decide that we simply must go back and land, then I’m sure we’ll be inventive enough to find a way.
Posted by Leigh Fletcher at 10:25 No comments: