Twenty Years of the Sutton Trust

Twenty years ago, Sir Peter Lampl founded the Sutton Trust, an organisation dedicated to improving social mobility through education, firstly in the UK and more recently in the USA.  As an 17-year old in Leicestershire, I benefited from winning a place on one of their summer schools in 1999, only the third year that the programme had been running.  My Nan had spotted a story about the new summer school in the Daily Mirror and encouraged me to have a go.  Now, 18 years later, I’ve been extremely fortunate to  work in some of the world’s top universities, and I look back extremely fondly on my experiences with the Sutton Trust. 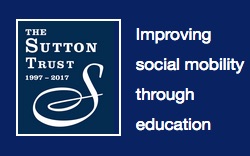 What did your parents do when you were growing up, and what sort of school did you attend?

I was a student at the John Cleveland College in Hinckley, a state school catering for 14-18 year olds in Leicestershire’s peculiar system of primary, middle and secondary schools.  It was a big place, with more than 1500 students - easy to fall through the cracks if you didn’t want to succeed.  I was one of the hard-working ones though - I enjoyed being at the school, and knew I wanted to continue my education post-18.  I’d be the first person in my immediate family to do so - my parents left school at 16, my Dad was owner and director of a successful timber merchant in Market Harborough, my Mum did secretarial work and accounts.  My family were enormously supportive of my ambitions to go to university, and had been saving for many years to help me to afford the tuition fees and living costs.

Did you have any preconceptions about going to a top university?

Certainly - my entire knowledge of top UK universities came from the media and television:  elite institutions, home to those with extreme talents and sufficient funds to see them comfortably through life without struggles, and destined to go into high-paid and high-power jobs.  Naturally, I was worried about fitting in, about what sort of people I’d be living and studying with, and whether I’d be able to compete with those that might have been given a leg-up in their education.  For me, the most important result of the summer school was the deconstruction of those preconceptions, showing me that many students at Oxford and Cambridge were just like me - with a little talent but insecure, willing to take on a challenge, and wondering about fitting in so far from home.

What was your experience like on the summer school? What sort of things did you do?

I got a place on the Physics summer school at Cambridge in the summer of 1999, while I was between Year 12 and Year 13 and heading for my 18th birthday.  We stayed in Newnham College (I later discovered that it was still a single-sex college), engaging in lectures, tutorials, team exercises and social activities.  Our two incredible lecturers, Julia Riley and Dave Green, took us through a range of university-level lectures, followed by mathematical and physical problems that we’d solve together, then discuss in small groups.  This, I came to realise, was about giving us a taste of Oxbridge education:  the bombardment of information in lectures, followed by careful thought, practise and questions during smaller tutorial groups.  It was really eye-opening, showing me how different the learning experience would be at a university compared to school.  We also had group discussions about interview techniques, providing me with suggestions for what interviewers were looking for in those short, make-or-break meetings.  I’m sure this is the sort of thing that privately-schooled students would get all the time, but for me it was extremely helpful.

But more than any of that, the most important consequence of the summer school was that I’d engaged and interacted with fellow summer students, current undergraduates, and university lecturers.  I could see that I shared a huge amount of common ground with them, and that I need not be worried about ‘fitting in’ if I were successful in gaining a place at one of these top UK universities.

What did you go on to study at university?

After returning from the 1999 summer school, it was time to put in my UCAS applications - I recall applying to UCL, Leicester, Sheffield - and probably others.  But my heart was set on Emmanuel College, Cambridge.  My interviews were in December 1999, and shortly after Christmas I had an offer of a place to study Natural Sciences.  A-levels, and the required STEP papers for entry to Emmanuel, followed in the summer of 2000, and I started my first year at Cambridge in October. Although I’d always thought that I wanted to do physics at uni, the Natural Sciences course was absolutely the right thing for me:  I fondly look back on my first year studying Maths, Physics, Chemistry and Cellular Biology, and my later specialisms in physics.  Everything I’d learned on the summer school stood me in good stead to be part of the Emmanuel community - from the lectures to the small supervision groups - and the people I was living and studying with have become lifelong friends.

What have you done since leaving university?

I never really left!  I moved from Cambridge to Oxford in 2004, studying for a PhD in planetary science in Oxford’s Atmospheric, Oceanic and Planetary Physics department.  My PhD took me to the USA as a NASA Postdoctoral Fellow, working in the Jet Propulsion Laboratory (JPL) in California.  I returned to Oxford for five more years as a research fellow, first with a Glasstone Science Fellowship and later a Royal Society fellowship.  That fellowship allowed me to move to the University of Leicester in 2015 to set up my own group in planetary atmospheres, so that I’m now lecturing and leading world-class research.  I’m directly involved in robotic spacecraft missions exploring the outer solar system, and in the use of giant ground-based observatories to study the atmospheric patterns on other worlds.  I’m extremely lucky to be paid to do a job that I love!

What would your advice be to young people who might be in a similar position to you as a teen?

The Sutton Trust’s central message of social mobility through education is more important now than ever before, as liberal politics and fundamental equalities appear to be on the backfoot.  Every child, no matter their social background or economic status, deserves the opportunity to shine, to develop their talents, and to access the best possible education.  Have confidence in your talents, and don’t be satisfied if people tell you you haven’t got what it takes to make it at the best UK universities.  The only way you’ll ever know is by giving it a try. You can put yourself in the right position by being pro-active:  ask your school for help with interview techniques, attend open days at a range of universities, and have a go at getting onto a Sutton Trust summer school.  They were so helpful to me in demystifying Oxbridge for someone who had never had prior exposure to them.  Find a subject that you enjoy, that you’re genuinely passionate about.  Lastly, there’ll always be rejections and let-downs, but don’t ever lose faith in your own abilities.

Posted by Leigh Fletcher at 09:25 No comments: