Dr. Mike Roman of @PhysicsUoL has published the first IR maps of Uranus' cold stratosphere using the @ESO VISIR instrument, showing warm 'caps' of hydrocarbon emission, and evidence of mid-latitude upwelling from the troposphere to the stratosphere. 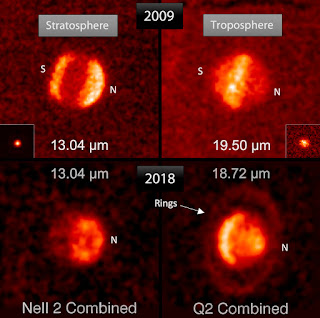 We combined Mike's VISIR thermal maps with a seasonal photochemistry model from Julie Moses (https://t.co/7nnY4vDM8P) to predict what #Uranus would have looked like if we'd had a VLT for decades... here's a GIF spanning 1966-2050 in two wavelengths.

But this is *only* two wavelengths - with the @NASAWebb MIRI instrument we hope to get full spectral and spatial maps of Uranus' cold stratosphere to understand how/why its chemistry/circulation differs to other worlds, so for us #WebbIsWorthTheWait
Posted by Leigh Fletcher at 12:57 No comments: