We’ve recently completed a long-term study of Jupiter’s Great Red Spot using a suite of ground-based observatories and spacecraft data to study the composition and dynamics of the solar system’s largest long-lived storm system.  The results are published in Icarus (http://dx.doi.org/10.1016/j.icarus.2010.01.005) and have been covered by several media sources: 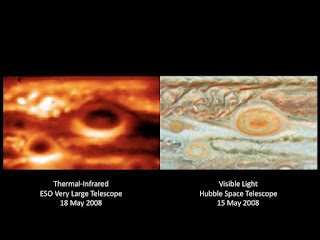 From the text of the ESO/JPL/Oxford joint press release:

“This is our first detailed look inside the biggest storm of the solar system,” says Glenn Orton, who led the team of astronomers that made the study. “We once thought the Great Red Spot was a plain old oval without much structure, but these new results show that it is, in fact, extremely complicated.”

The observations reveal that the reddest colour of the Great Red Spot corresponds to a warm core within the otherwise cold storm system, and images show dark lanes at the edge of the storm where gases are descending into the deeper regions of the planet. The observations, detailed in a paper appearing in the journal Icarus, give scientists a sense of the circulation patterns within the solar system’s best-known storm system.

Sky gazers have been observing the Great Red Spot in one form or another for hundreds of years, with continuous observations of its current shape dating back to the 19th century. The spot, which is a cold region averaging about minus 160 degrees Celsius, is so wide that about three Earths could fit inside its boundaries.

The thermal images were mostly obtained with the VISIR [1] instrument attached to ESO’s Very Large Telescope in Chile, with additional data coming from the Gemini South telescope in Chile and the National Astronomical Observatory of Japan’s Subaru Telescope in Hawaii. The images have provided an unprecedented level of resolution and extended the coverage provided by NASA’s Galileo spacecraft in the late 1990s. Together with observations of the deep cloud structure by the 3-metre NASA Infrared Telescope Facility in Hawaii, the level of thermal detail observed from these giant observatories is comparable to visible-light images from the NASA/ESA Hubble Space Telescope for the first time.

“One of the most intriguing findings shows the most intense orange-red central part of the spot is about 3 to 4 degrees warmer than the environment around it,” says lead author Leigh Fletcher. This temperature difference might not seem like a lot, but it is enough to allow the storm circulation, usually counter-clockwise, to shift to a weak clockwise circulation in the very middle of the storm. Not only that, but on other parts of Jupiter, the temperature change is enough to alter wind velocities and affect cloud patterns in the belts and zones.

“This is the first time we can say that there’s an intimate link between environmental conditions — temperature, winds, pressure and composition — and the actual colour of the Great Red Spot,” says Fletcher. “Although we can speculate, we still don’t know for sure which chemicals or processes are causing that deep red colour, but we do know now that it is related to changes in the environmental conditions right in the heart of the storm.”

Notes:
[1] VISIR stands for VLT Imager and Spectrometer for mid Infrared (eso0417). It is a complex multi-mode instrument designed to operate in the 10 and 20 micron atmospheric windows, i.e. at wavelengths up to about 40 times longer than visible light, and to provide images as well as spectra.

More Information:
This research was presented in a paper to appear in Icarus:

Images
Jupiter’s Storms: Temperatures and Cloud Colors
Link to NASA Photo Journal
New thermal images from ESO’s Very Large Telescope (VLT) and other ground-based telescopes show swirls of warmer air and cooler regions never seen before within Jupiter’s Great Red Spot. The images enable scientists to make the first detailed weather map of the inside of the giant storm system. One observation illustrated by this image is the correspondence between a warm core within an otherwise cold storm system and the reddest colour of the Great Red Spot.

The image on the left was obtained with the VISIR on the VLT in Chile on May 18, 2008. It was taken in the infrared wavelength range of 10.8 microns, which is sensitive to Jupiter's atmospheric temperatures in the 300 to 600 millibar pressure range. That pressure range is close to the altitude of the white, red and brown aerosols seen in the visible-light image on the right, which was obtained by the Hubble Space Telescope on May 15, 2008. These images show the interaction of three of Jupiter's largest storms — the Great Red Spot and two smaller storms nicknamed Oval BA and Little Red Spot.

Jupiter's Great Red Spot (GRS) is one of the best-known and most often observed meteorological features in our solar system.  However, until recently we knew very little about the interior temperatures and structure of the giant storm system, nor how it changed with time.  Much of what we learned came from visiting spacecraft (Galileo and Cassini), but they only provided isolated snapshots of the GRS, and couldn't resolve any small-scale details of the storms.  This paper reports thermal imaging of the storm and its surroundings from 8-m class observatories (ESO VLT, Subaru and Gemini), allowing us to see the thermal details of the eye of the storm for the first time.  Furthermore, as these 8-m observatories provide resolutions comparable to Hubble visible images, we're able to connect the temperatures and composition measured from the ground with the visible colouration of the storm.  We found that the deepest red colour of the GRS is associated with a core of warmer temperatures within a typically cold storm system, connecting the red colour to the physiochemical conditions of the clouds.  The warm core and associated red colours moved in position with time.  Furthermore, this small warm core affects the speed and direction of the winds in the very centre of the storm.

The extensive dataset contains a wealth of information about the detailed structure of the storm.  We found that aerosols and ammonia gas were depleted in a ring surrounding the storm, suggesting strong sinking of air at the storm's edge.  The shape and structure of the storm changes as you move deeper in the atmosphere, and the strongest upwelling (measured using gases as tracers of motion) is not right in the middle of the storm as we previously thought, but is closer to the northern edge of the GRS.  The clouds and hazes surrounding the GRS vary with time, as Jupiter experiences periodic outbursts and upheavals of the clouds that are still poorly understood, and as other large storm systems move close and exert forces on the atmosphere surrounding the GRS.  And finally, the GRS often has a thermal tail extending away to its southwest, that doesn't appear to have any counterpart in the clouds themselves.

These first detailed observations of the internal temperature and composition of the storm will present a new challenge to modellers seeking to understand how the GRS formed in the first place, and how it changes with time.  And a better model of Jupiter's largest storm will help us to understand the dynamics, chemistry and evolution of storms on other planets in our solar system and beyond.

If we want to compare the intensity of the storm with something else, how big is it?
Think of fitting nearly three Earths end-to-end across the length of the interior of the Great Red Spot - that gives you an idea of how large this huge storm really is.

Is it right to call the atmosphere over the spot “air”?
Yes, if you think of it as a gas - just like the Earth's atmosphere is gas.  Jupiter, in fact, is mostly gas, and what we're seeing is simply the tops of clouds in the visible.  The temperatures and other physical properties we're picking up are those of the (mostly) molecular hydrogen and helium gas, with traces of ammonia, methane and phosphine.  But you want to be sure this isn't Earth-like air, whose composition is much different: something like 70% molecular nitrogen, most of the rest molecular oxygen, with trace amounts of carbon dioxide and water vapor.

So what's the next step for exploration of Jupiter and its moons?
NASA is due to launch the Juno mission to Jupiter in August 2011. Meanwhile, NASA and the European Space Agency are developing concepts for a joint mission to the Jovian moons Europa and Ganymede, both of which are thought to harbor oceans' worth of liquid water beneath their icy surfaces. Launch of the Europa Jupiter System Mission could come around 2020.

How would the presence of a warm, weakly rotating core likely affect the dynamics of the GRS in terms of its persistence and structure?
The atmospheric temperatures and the circulation of the storm are intimately linked together - this warm core means that the anticlockwise winds of the GRS can actually reverse, just slightly, right in the heart of the spot.   In terms of structure, we know that this warm core is a persistent feature at all the altitudes we have access to, but we don't know how deep the storm penetrates into Jupiter's deep troposphere.  That will have to wait for the next generation of spacecraft observations.  Finally, the paper shows that the warm core was there every time we looked, over a three year period.  So it seems to be a long-lived feature of the storm, and the next generation of dynamical models will be needed to explain why this warm heart is present, and whether it's typical of storm systems on gas giant planets.

How is it this structure hasn't been detected before?
We've never had the capabilities of large 8-m observatories before!  As the technology has improved, the spatial resolution achievable from here on the ground has grown in leaps and bounds.  The new results surpass even Galileo and Cassini in terms of their quality.  WIthout these world-class observatories, we wouldn't have had access to the internal environmental conditions of the storm.

The mystery of the GRS origin will have to wait for new dynamical models to be produced which fully capture the features we're seeing in our data.  We study the GRS because it's the best example of a giant storm on a gas planet, and creates a template for our understanding of storms in our solar system and beyond.  But it's not the only example, and clues of the GRS origin might be better gleaned from it's companion, Oval BA, which reddened in 2005/06 and is now the second largest storm system on Jupiter.  So Oval BA might tell us about the birth of giant red storms, whereas the GRS tells us about why their stable for such long periods of time.
Posted by Leigh Fletcher at 21:10 No comments: