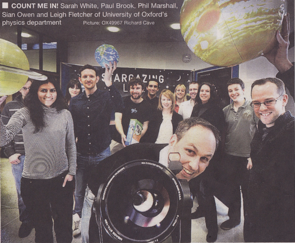 Oxford's physics department opened its doors to the public on a cold Saturday in January, inviting the local community into the lab to catch a glimpse of some of the exciting ideas we spend our days working on.  With over a thousand people through the doors, and lots of happy memories, I think we can call it a runaway success!  Designed to tie in with the BBC's Stargazing Live, the Stargazing:Oxford event was the first of its type.  As organisers, we wanted a village-fete style of event, allowing the public to mix and interact with the scientists to see some of the passion and enthusiasm we have for our subject.

We had the Philip Wetton telescope on the roof open for visitors; an inflatable planetarium dome; rapid-fire talks on all manner of topics from planetary exploration to galactic evolution and beyond; our own version of University Challenge; plus the Science Cafe, where we got to exhibit some of the neat toys we get to play with!  The event was a tremendous experience for us, not least because it brought together the atmospheric physicists from the East Physics with the astronomers of West Physics, forming new links between us that will hopefully pave the way for even bigger events in the future. 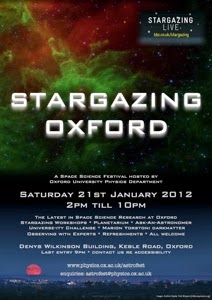 A NEW GENERATION OF PLANETARY EXPLORERS

The planetary group were primarily involved in the Science Cafe, with a stand devoted to exploring planets both in our solar system and beyond.  We ran a great comet demonstration, using a mix of dry ice, soil, water, smelling salts and Worcestershire sauce to replicate the icy mixture of a comet.  We made a great mess, but it was worth it to see the jaws of our guests dropping as the freezing cold comet nucleus emerged, jets of cold carbon dioxide streaming away from it.  Oxford works on a mission called Rosetta, currently on its way to rendezvous with a comet in 2014, so watch this space for future discoveries...

All this cometary fun was monitored by a thermal infrared camera, sensitive to the heat energy being given off by an object, rather like firefighters would use to see body heat in a disaster zone.   The camera can be used to take the temperature of an object without touching it, something we call remote sensing.  Infrared light is just like any other, giving reflections and appearing brighter from some objects (my warm hand) than others (the cold comet nucleus), it's just at a longer wavelength, meaning the light has less energy than the visible light you’re used to.  The planetary group measures infrared light from all the planets in our solar system, using the measurements to literally 'take the temperature' of another planet, without having to actually go there with a thermometer.   The camera was hooked up to a big 50" LCD screen, so we had a great time taking photos of families, emailing them them later with these great infrared souvenirs.

We also had a host of other things on show - pieces of equipment known as flight spares (i.e., there are two in existence, one on a spacecraft somewhere in the solar system, and the other sat in our lab in Oxford).  This included the detector assembly for the instrument we work with on Cassini (CIRS, an infrared instrument to measure Saturn and Titan's temperature and composition); the wind sensor for Beagle 2 (the ill-fated mission that crashed on Mars in 2003); a new design for wind sensors measuring the speed of sound (something being worked on in Oxford right now); plus lots more.   We played with a giant inflatable solar system, gave away 'Top Trumps' solar system cards, showed 3D movies of NASA and ESA missions to the planets, and generally had a great time showing off our science to the interested public.

The feedback was superb - one of the great side-effects of the village fete style was that people were quite happy to come and ask lots of questions.  The BBC shows had ignited a real passion, and we had people from far and wide - I remember talking to one family that'd come all the way from Bristol to see inside our Physics department, and one mother of a 7-year old who was astonished to be told 'I want to be an astrophysicist when I grow up....'!  Here are some more messages we received later on:

"The open day was excellent - apart from the range off interesting activities, we were overwhelmed by the enthusiasm of the staff."

From a 9 year old:  "I really enjoyed the lego build your own universe, looking at the stars through telescopes, the milky way poster and being able to talk to the staff when we were in the queue. Also I could stay late and have my supper there too."

"This is ace!  Thank you for an excellent day, 5 hours went in a flash."

"Thanks for cool look into the fantastic world of astronomy/cosmology/and physics and from the length of the queues outside I'd say that the day was a big success i wish i could have stayed longer to look at the main telescope in the roof top observatory."

"Thank you so much for this. My son is thrilled with the infrared image and took it in to show his class at school today.  Your event was really lovely and beautifully executed. It’s no wonder so many people came!   Many many thanks, and if you ever do anything similar, please do let us know as we’d love to come."

So despite 10 hours on my feet and a totally exhausted voice, I got back home absolutely buzzing.  I'd managed to get my first ever glimpse of the Andromeda galaxy through a telescope on the roof (we had local amateur astronomy societies there to help); and I'd held a real chunk of Mars (a meteorite) in the palm of my hand!   An open event like this serves to remind us of why we spend hours in front of our computers to study the universe we live in, and how lucky we all are to be paid to do our hobby!  It's got to be one of the best jobs in the world.  Everyone benefited, the planetary group had a great time meeting the rest of the Astrophysics department, and I can safely say we'd be happy to do it again sometime soon!
Posted by Leigh Fletcher at 21:50 No comments:

Email ThisBlogThis!Share to TwitterShare to FacebookShare to Pinterest
Labels: Outreach

During the course of preparing for Stargazing Oxford in January 2012, we searched the web for a selection of good paper models of spacecraft.  If you aren’t able to come along on the day, here are a sample for you to print out and assemble - enjoy!

Website of ESA Spacecraft (including two versions of the Cassini-Huygens spacecraft):
http://sci.esa.int/science-e/www/object/index.cfm?fobjectid=35013

..and a similar page for NASA spacecraft (including Galileo):
http://solarsystem.nasa.gov/kids/papermodels.cfm

You can make planet-like icosohedra using the links on this page:
http://www.planetscapes.com/maps/ico.html

You can also make a model of the James Webb Space Telescope:
http://www.jwst.nasa.gov/papermodel_swales.html

How about some simple models of paper scientists themselves?  (Einstein is my favourite)
http://lablogatorios.com.br/rainha/scientists-papercraft-models/

...Or some more planet models (needs to be translated from German):
http://www.sternwarte-recklinghausen.de/bastelboegen.html
Posted by Leigh Fletcher at 21:51 No comments: